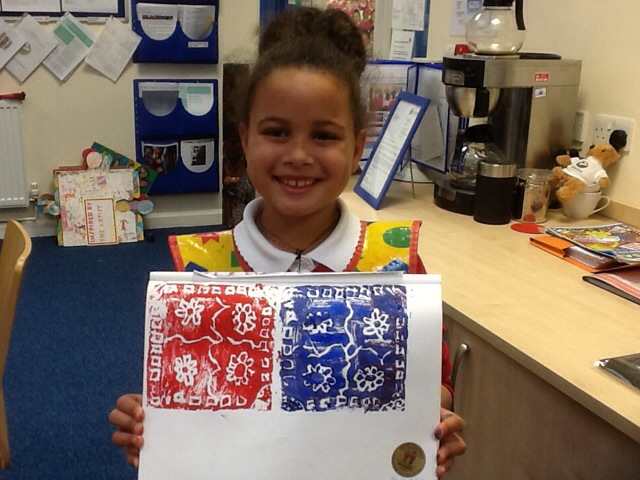 Year 2 have been working on their printing techniques. I was very impressed by the way in which they were laid out, in a neat format.
There was not much ink on the children either! 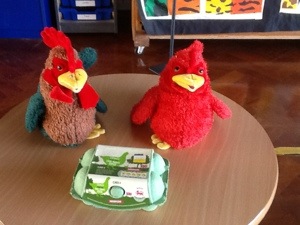 Everyone is getting very eggcited!

There is such eggspectation in the air!

Why could this be?

Could it be that the chicken coop is almost completed and the chickens will be arriving very soon?

In assembly this morning Mrs Willis talked to us about the new chicken enclosure and how the new hens are arriving next week. We are going to be responsible for looking after them. To do this we are forming a committee of pupils from each class who are going to help look after them.

They will need feeding every day – they have a special feeder that can be filled with pellets that should last for several days so that we don’t have to come in at the weekend.

Because the food is dry they will also needs lots of water. Again, there is a special water container that will give several days of water, won’t get knocked over and keeps the water clean.

They also need something to sleep in and we have a special hen house for them to keep them warm and safe from predators – especially foxes. The enclosure is also, hopefully, fox proof!

The hen house is going to need cleaning once a week and Mrs Willis is going to have a team of helpers every Friday to make sure that it is spotless.

The chicken committee will not only be responsible for feeding and cleaning the chickens, they will also decide what is going to happen to the eggs.

SATs practice – a chicken will lay one egg a day and we will have four chickens. We think we could sell the eggs at £1 for half a dozen eggs.

Do you think that this is an eggcellent thing to do?

Do you have any egg or chicken jokes that you could share with us?

Another assembly, another flurry of snow outside and loads of parents! Year 2’s assembly was obviously very popular. Mr Spink and Mrs Linsley classes put on a great performance.

Today’s assembly was a sad occasion because it was the last visit by Rev Nigel Beer who is moving up to Carlisle. He has been a governor and a great supporter of the school for so many years dating back to the previous school. He was presented with a fantastic cake and loads and loads of cards, some plants and a few bottles of wine as well! Mr Moore also put together some videos for Nigel to remember the school by. Nigel then received a deafening BRAVO from the school.

A list of pirate names introduced us to the theme that Year 2 have been looking at over the last week. One of the things that the classes have made were scary pirate flags designed to frighten people into giving up their treasure. We were then shown the fantastic class treasure map – but not long enough for us to spot where the treasure is!

Pirates speak funny words like “ahoy”, “avast”, “booty”, “landlubbers” – we were given a translation to these strange words. 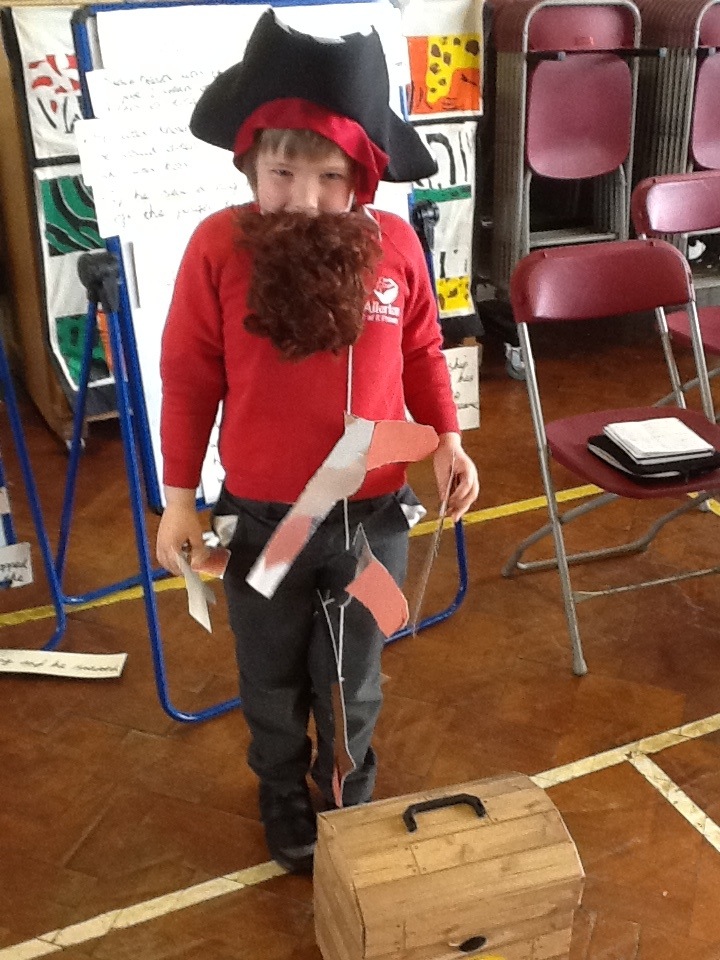 The two classes have been finding out about two pirate captains – Blackbeard and Henry Morgan. We looked at the appearance of Blackbeard who apparently used to set his beard on fire to scare his enemies. He had a huge scar on his face from a fight, he carried six pistols for his own protection, he was a terrifying man! Blackbeard was one of the most famous pirates on the seven seas and in a very few years captured many ships. He was a ruthless man who often shot his own men to show that he was the boss. In 1780 Blackbeard was captured and beheaded, his head was put on a mast as a warning to other people. Fortunately, Oliver, who had been dressed up as Blackbeard wasn’t beheaded or have his beard set on fire!

We then heard about Henry Morgan, another pirate captain who became very rich attacking Spanish towns and ships. Unfortunately one of his ships blew up and he was marooned on a rock at sea. He was rescued and built up a big fleet of pirate ships that he used to attack Spain. Eventually he was arrested by England but he was later released. He retired to Jamaica where he enjoyed a life of leisure.

Everyone then voted as to who was the most fearsome pirate of them all – it looks like the audience thought it was Blackbeard but it was declared a draw!

Year 2 then sang a pirate song about jumping aboard a pirate ship and drinking rum to warm our tums!

After the worst pirate joke ever (aaaargh!!!) Mr Spink asked everyone what they had learnt. Year 2 did a fantastic job of teaching us about pirates. To finish everyone joined in with singing the pirate song again.

While snow was falling outside on the day of the Spring Equinox year 5 and 6 took our assembly in a warm, snug hall. 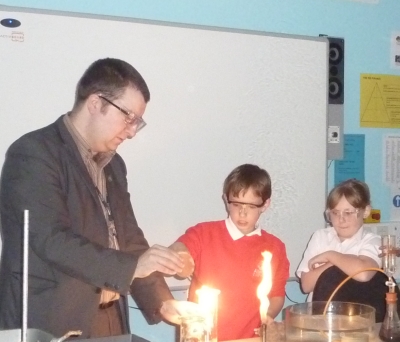 Our intrepid news reporters first told us about a science visit to Allerton High where they made fire from water! This was done by splitting water into hydrogen and oxygen which can be used to power rockets.

A news item followed on a year 5 fund raising movie night showing “Goodnight Mr Tom”. A review of a play about the story was then read giving a rating of 9/10 for the play.

Next we had some poems about Daedalus and Icarus brilliantly read by their authors. 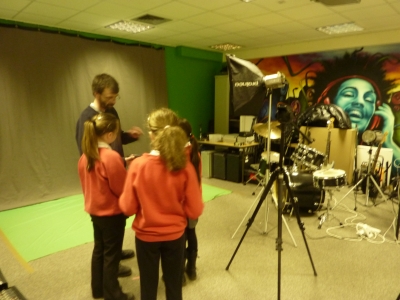 For some strange reason some pupils kept walking across the stage. It turns out that they were acting out the walk to the North East Leeds CLC at Allerton Grange where they made some podcasts, some of which are on the class blog.

In music year 5 and 6 have been working on writing music about the planets and we were given a performances of two versions of Life on Mars.

Professor Adam showed us how in maths they have been looking at how to times and divide fractions. This was a bit mind stretching!

We closed with a prayer read by Iman.

Today’s assembly started with a wonderful slide show of what our children have been up to recently, there were lots of photos of the children learning and enjoying themselves both inside and outside the classroom. As the children filed in quietly loads of parents came to join us, it was great to see them all!

The class have been reading Goldilocks and the three bears and so they sang a song based on the story and acted it out. Our blue eyed Goldilocks, Sophie, was brilliant and the singing was superb, we could hear every single word! Baby bear’s voice was particularly brilliant.

One group of children came in dressed in hi-viz jackets and hard hats. Accompanied by some slides they told us about the new building and how they had also done some measuring and building. The new cloakroom is now open. At the opening last Friday the pupils raised £91 for the new chickens.

We then had a song about putting hats and coats on before going out to play while some of the class got dressed ready for play. Again, their singing was brilliant!

Last week we also had a superhero day when the class all dressed up as superheroes. On that day they made some superhero biscuits, the perfect excuse to sing the biscuit song, gobble, gobble, munch, munch!

The alphabet song demonstrated that our children can not only sing well but now know their alphabet.

After the final prayer the children received a huge round of applause for their brilliant assembly with a special clap for baby bear. 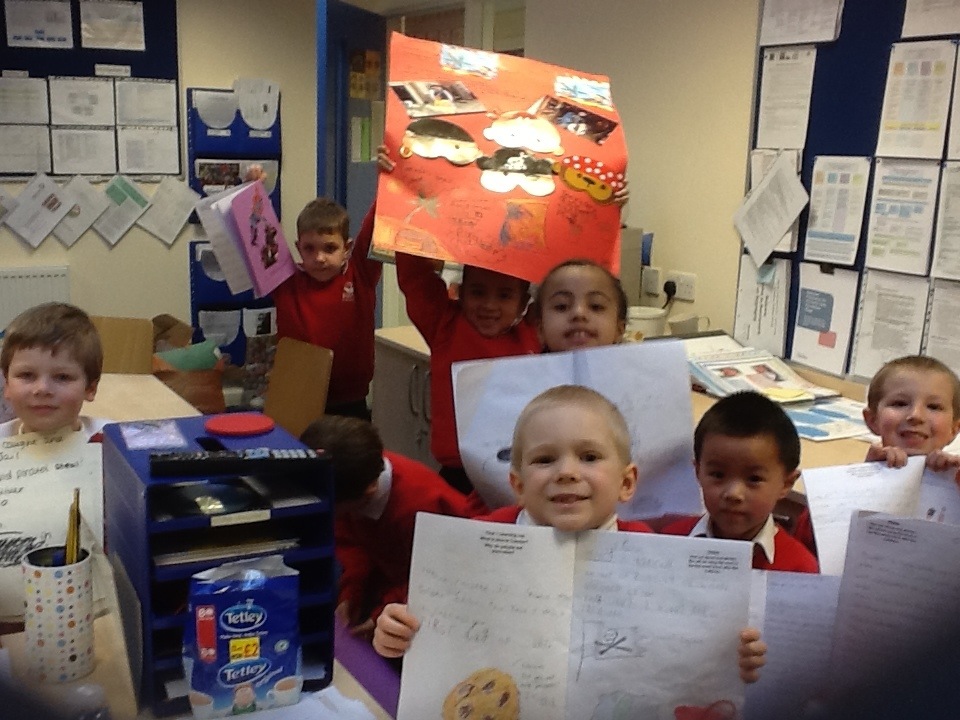 Year 1 were so excited to share with me,all that they had been finding out about Pirates.
I could have created a whole crew, there were so many wonderful Learning Logs to look at!
Well done Year 1! 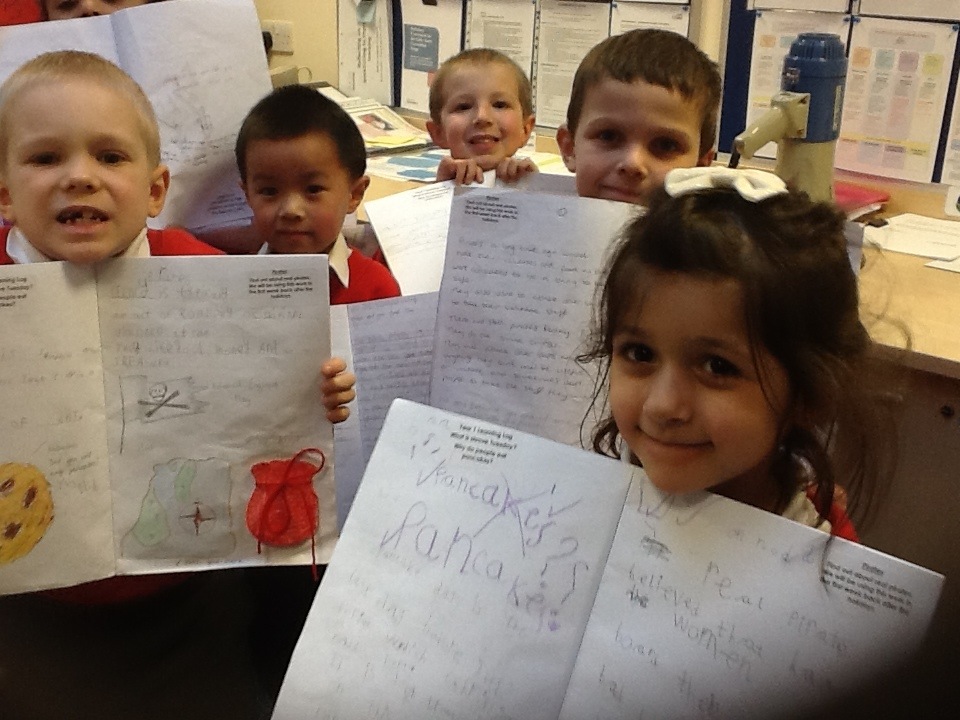 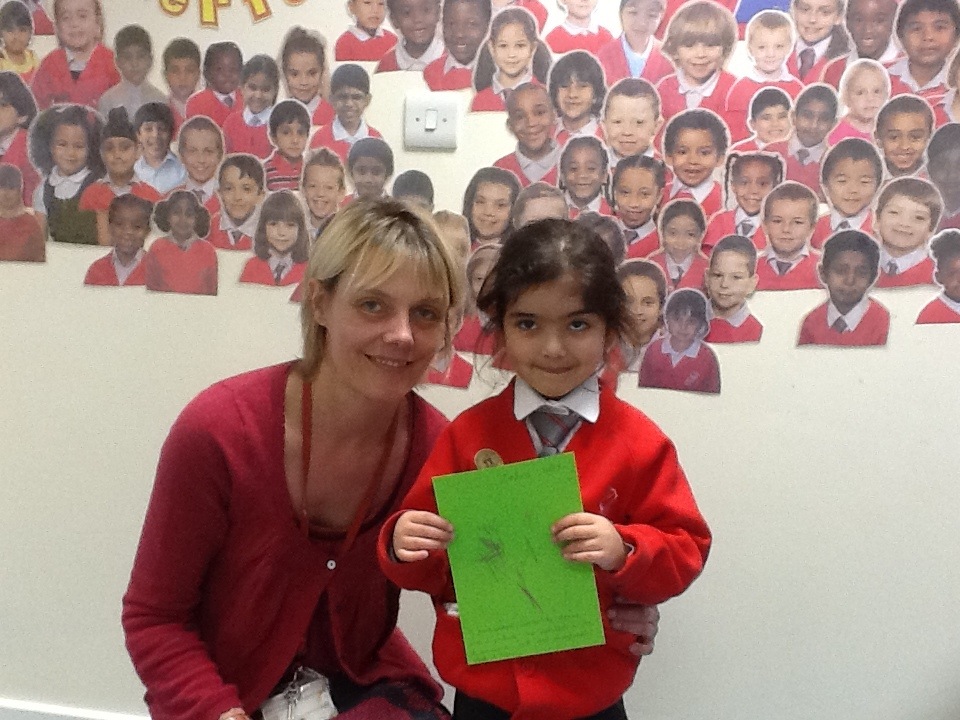 It is wonderful to be able to share in the learning journey of each child in school. This was particularly exciting…..a first drawing! Well done!

In assembly this morning the children shared with us about what makes good community and fellowship – things that make our school a happy and safe place to be, things such as friendship, looking after each other, sharing and working together. 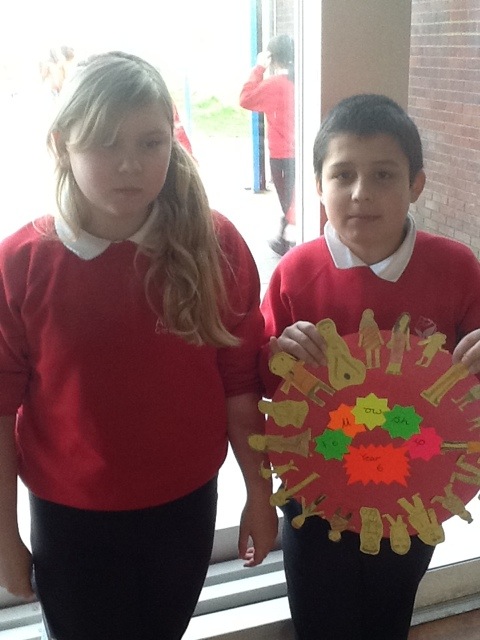 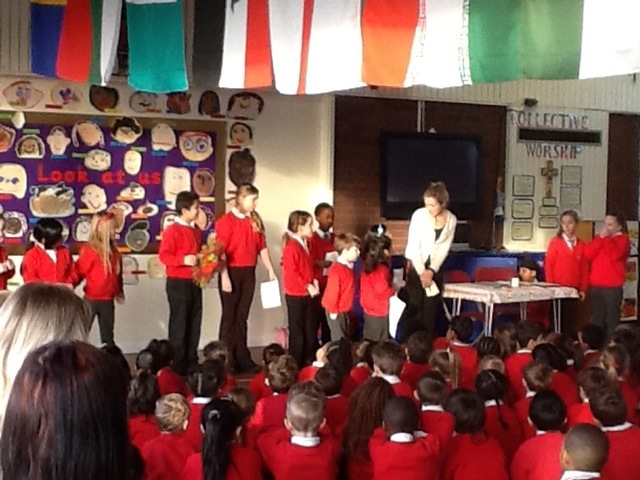 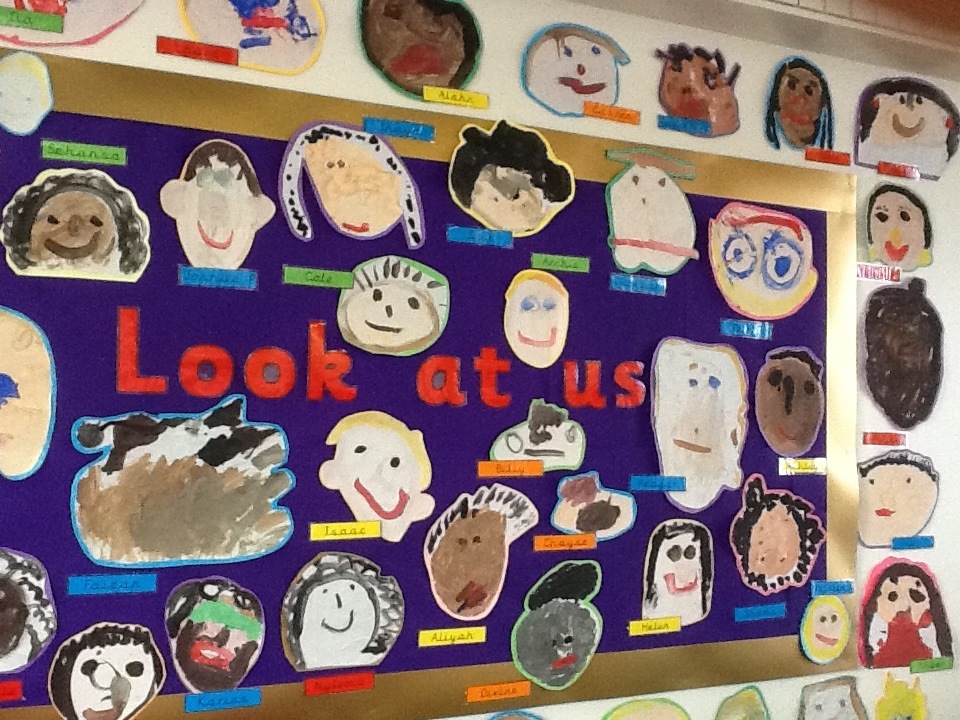 What a bright and vibrant display, to greet us in to the new year.
Thank you to the Reception children who have shared their paintings with us. They do look fabulous….but can you spot the one which is upside down?! 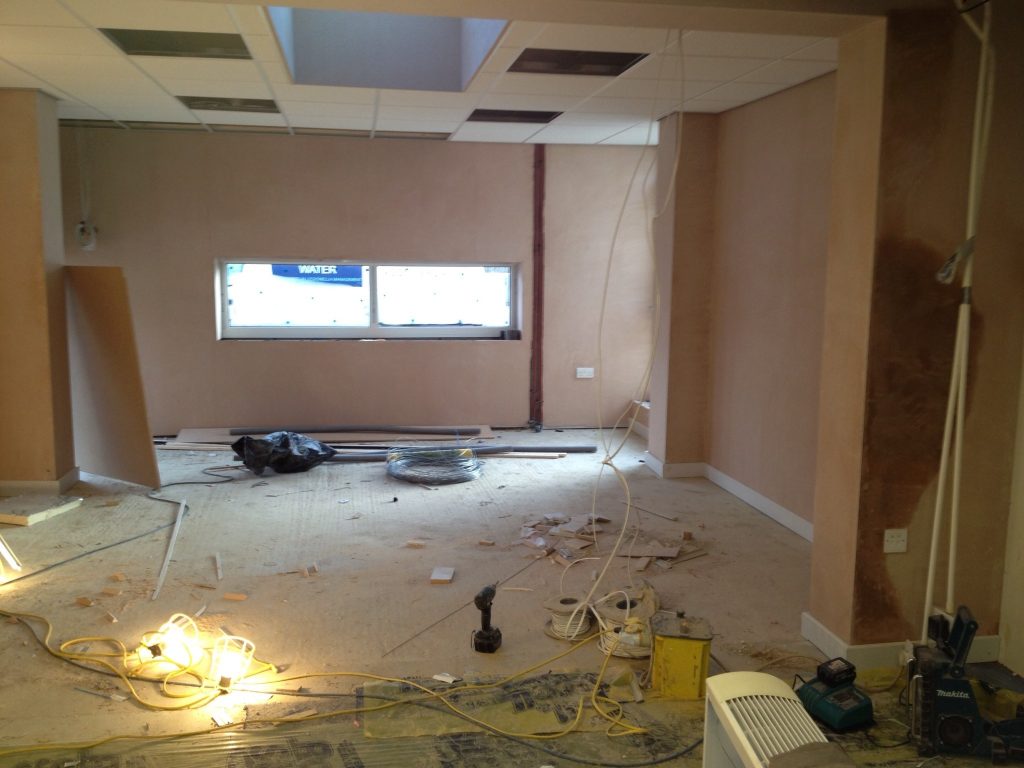 This is a photo from the start of this week.
As you can see, the extension is really taking shape and is on target to be ready just after Christmas.
We are all really quite excited about this, as it really will make such a difference!